Noir on the couch trailer

Talky Tina laid down the challenge and I have been wanting to try another gif the portrait for a while. So I looked for high resolution portraits of our jimgroom on the google, as Tina suggested. Then got to work as per Ryan Seslow’s excellent tutoring on this lovely way of making gifs last semester in CT101. I think that there is the ghost of another in this gif though….

Another great example of DS106 Collaboration

We started with an old beer commercial found by Karen Young. I decided to turn it into a DS106 themed commercial and wrote the script. Jim Groom kindly recorded his lines and emailed them to me. So did Karen with added burning dinner sound effect. The Headless Inkspots provided the music. I edited it all together, adapted the poster and bingo! We premiered the commercial as a trailer to ‘Noir on the Couch: An interview on the Femme Fatale in Film Noir with Prof. Young’ on the DS106 Good Spell tonight. This segment is part of a whole show ‘The Fabulous Femme Fatale’ to be premiered soon on DS106radio and sponsored by Rockylou Radio. Date to be announced. 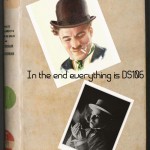 An example of collaboration

So I became obsessed with friction matches in Noir and wrote about that a while back.

I created a script based on something I heard on Double Indemnity and made a video commercial. I was not happy with the voices as I did them myself and then changed them in Garageband. As we were working on a collaborative radio show for Noir106, I decided to turn it into a radio commercial and asked for help from the community.

This is the kind of thing that makes the open web so special. I asked dogtrax for help and he did the most awesome voiceover. I asked Karen Young (@karenatsharon) for help and she did the greatest femme fatale voice ever. With such great voices and script, I had to find some awesome music and who better than The Headless Inkspots to provide original noir inspired music? DS106 is pretty lucky to have them as part of our community.

In sum? I think this is the best commercial ever, and it shows how a simple idea can turn into something special as different people bring their gifts to it. Thank you all, and roll on the Fabulous Femmes Fatales Show on Rockylou Radio this March with the irrepressible Ms Talky Tina in a starring role as Daphne de Beauvoir.

Stop press: Ms Talky Tina in conflict with Rockylou Radio Productions. Read all about it!